Victoria Group at the Fifth Agricultural Forum “Food for Europe” 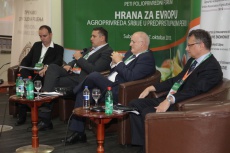 On October 16 and 17 in Subotica, the Fifth Agricultural Forum “Food for Europe” gathered a large number of local agriculture representatives from the private and public sector. The central theme was the question of how to develop agriculture in the pre-accession period. The forum organizers, the Economics Institute and the Serbian Association of Agricultural Economists, pointed out that the agribusiness has been the largest unexploited potential for decades, although it is a strategic area of economic sovereignty of our country. “Significant structural changes, different merger models, operational strategy and investments in technological development and infrastructure are necessary – these are the prerequisites for improving the competitiveness of Serbian agribusiness”, said Dragan Šagovnović, General Manager of the Economics Institute.

Nikola Vujačić, Chief Operations Officer of Victoria Group, participated in the panel discussion about the effects of privatization and private investments in the agribusiness in Serbia. He emphasized the importance of investments for the improvement of competitiveness, but also for successful privatizations like the ones implemented by Victoria Group.

“The privatization of Sojaprotein is probably one of the best privatizations in the Serbian economy. From a factory which had an extremely modest volume of seed processing with the production of mainly soy meal, today our soybean factory is processing 250,000 tons of soybeans with 70 percent of the products having high-level technological processing. Over 70 percent of sales are exports, mainly to EU countries, but we are also present on the world markets from South Korea to Chile. We purchased the Victoriaoil factory in non-operational condition with a few employees, and reached a situation in which we process 350,000 tons of oilseeds and distribute half of the sales to foreign markets. It is a great challenge to be competitive on the global market, particularly in countries with large agricultural subsidies, in contrast to Serbia, where we are faced with a higher cost price due to lack of subsidies for domestic farmers. Our success is achieved by continuous investment in competitiveness. In the last ten years, we have realized huge investments of over EUR 200 million, due to which our facilities are today equipped with the most up-to-date technology at the global level”, said Nikola Vujačić.

In addition to this panel, six more panels were organized at the Fifth Agricultural Forum “Food for Europe”: on the efficiency of implementing the Strategy of Agriculture and Rural Development, ownership of agricultural land, sustainability of small family farms, expansion of retail chains in Serbia, restrictions in export of agricultural and food products, and financing and insurance in agriculture.